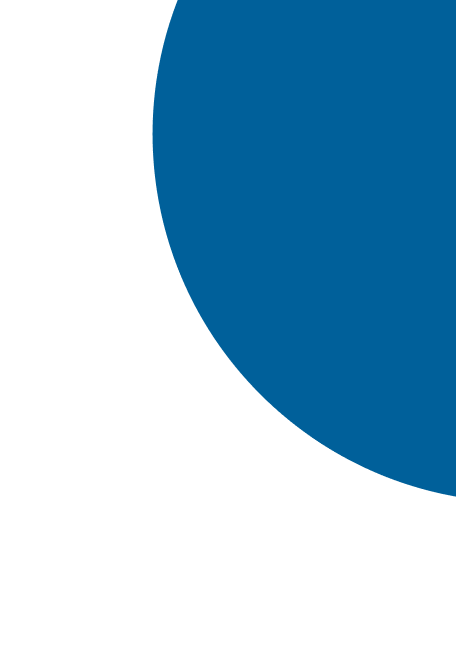 We build it – we run it! Easier said than done, especially if you are in a very small team designing, developing and managing multiple applications in several Kubernetes clusters. In order for 5 people to develop data pipelines, backends, frontends, testing, infrastructure and all other aspects of a software product, we needed to find ways to organise and automate as much as we can to save time. In this post, I will share our approach to managing all those apps in several Kubernetes clusters, across multiple environments using GitOps principles and ArgoCD as a tool for it.

This article is not a tutorial on how to install or configure ArgoCD. This is just me sharing thoughts about this tool after using it in a real-world project for a year.

What problems have we faced?

Besides regularly working on features of our own apps, all of the dependencies listed above needed frequent updates and reconfigurations. Initially, we were doing all deployments manually by “helm install/upgrade”. It was so time consuming and sometimes even exhausting to run all those commands and scripts and keep track of what was changed and where. Later we started using custom Jenkins pipelines to deploy Helm charts imperatively. It helped, but we have caught ourselves asking all of these questions more than we really wanted:

My definition: GitOps, for my team, is the solution for all problems listed above!

If we go for a longer, more official definition, you might say that GitOps is all about declaring infrastructure in a git repository using all available git mechanisms (e.g. branching, pull requests, reviews) and not worrying about how those changes will be applied to your cluster.

Git is the source of truth! Kubernetes operator (e.g. ArgoCD) will apply the declared state from Git to clusters automatically.

Following image displays the usual (but a little bit simplified) flow of infrastructure changes in our project. In it, it’s obvious that developers only interact with Git, and from that point on, ArgoCD takes care of deploying declared state to a cluster.

To deploy an application to a cluster using ArgoCD, you just define a simple application manifest yaml with source and destination sections. Source defines what is being deployed. In our example, it’s Vault helm chart with some parameters stored in a certain git repository in a vault folder (path). Destination defines where, to which cluster and namespace Kubernetes resources will be applied. There are also sync options to choose the level of automation: 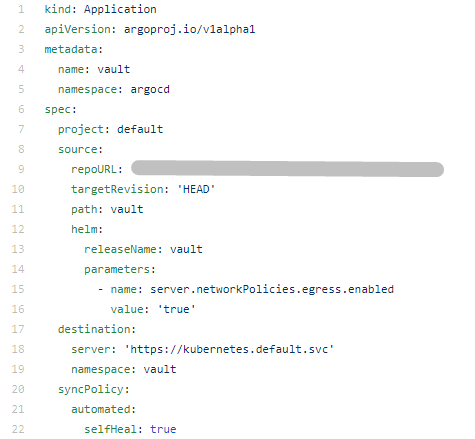 After committing this to git and merging to master (possibly via Pull Request and review from your colleagues), web hook will tell ArgoCD that the repository changed. ArgoCD will then automatically fetch the repository and will make sure that desired state is deployed to the cluster. Application will magically (without page refresh) appear in the apps list in UI: 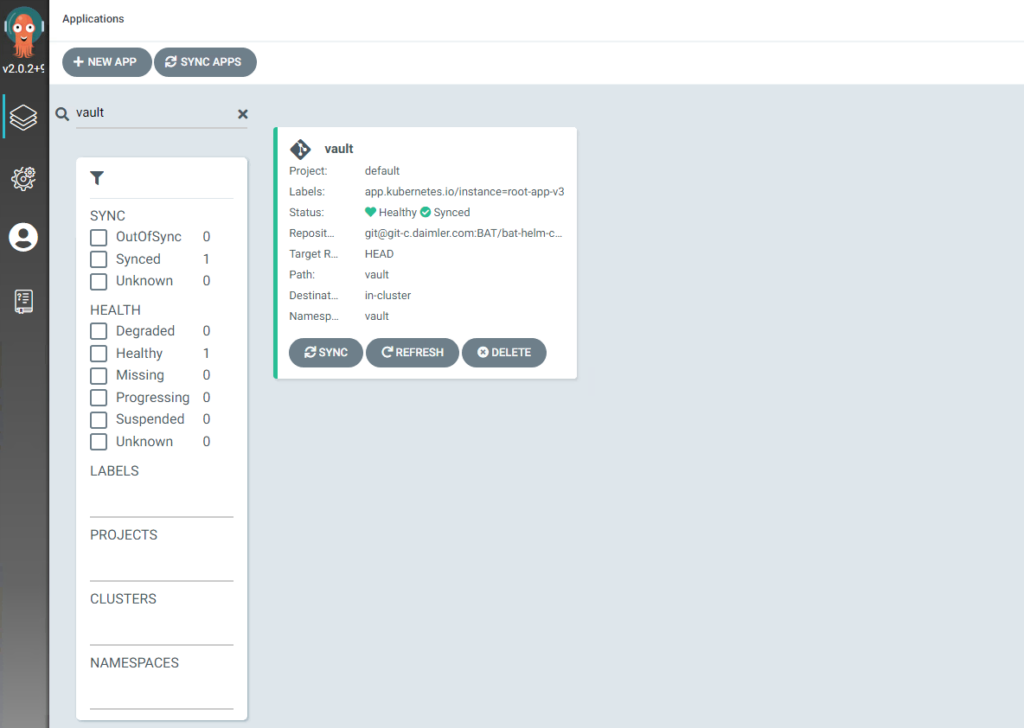 Then, when you click on the application card, you can see the tree of resources deployed and also inspect details (e.g. events or logs from pods): 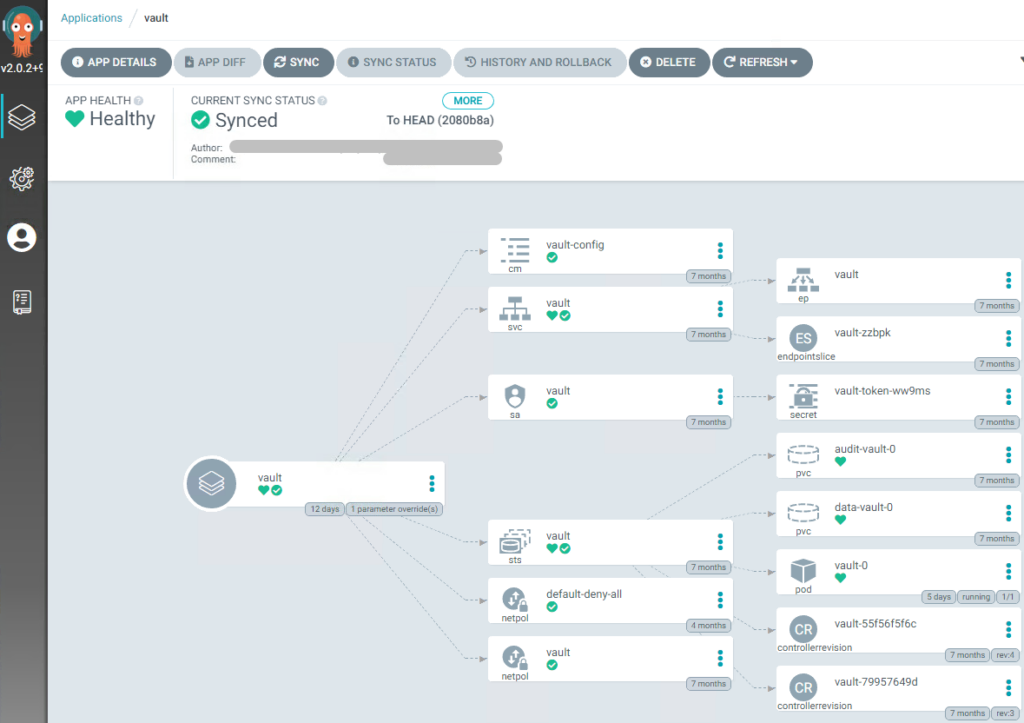 If everything is OK and the applications are ready, a pleasant green heart icon will let you know. If there would be some error, you can easily rollback to the previous state just by reverting git commit and wait a few seconds for Argo to synchronise the cluster.

History of changes can be reviewed in the git log and the current state of the cluster will be always in sync with the git repository.

So, the Vault application is deployed without a single “kubectl” or “helm” command executed. No need to distribute sensitive cluster credentials, no need to install CLI, no need to struggle with VPN-s if your cluster is somewhere in the Intranet. To delete it, just delete it from Git and the app will be removed fully.

After we demonstrated in this simple example how GitOps idea works in the ArgoCD world, let’s try to answer our own questions from the beginning of this article.

They always are by definition. If there is an error, you will know it! ArgoCD provides a useful Grafana dashboard on top of which alerts can be built. Also, if you do not have Grafana, ArgoCD has its own notification solution.

It’s in the Application manifest file in Git. Just check the repo.

No more imperative approach. Just declare what you want. ArgoCD knows how to make it happen.

Just revert the git commit and wait for a few seconds.

Manual changes to apps are (optionally) healed by Argo so repo stays in sync with cluster state even if someone manually changes stuff using kubectl.

This is achieved simply by creating pull requests in a repository where ArgoCD apps are defined. So, again, everything is just plain old Git.

It’s simple. Just define a new “destination” in your app manifest and it’s done! If application data migration is needed, that is out of scope of ArgoCD but you may explore ArgoCD Hooks.

Not anymore! New team members can have a very good overview of what apps are in a cluster and how they are configured by just checking git or ArgoCD UI. To deploy a new app, they would just commit a new application manifest. No need to adopt some custom solution like creating pipelines or doing cumbersome manual deployments to cluster.

In our project, we have several permanent environments (dev, test, prod). All of those are mirror images of each other and they reside in different folders in git. Spawning another environment is a matter of duplicating the dev environment’s folder with adjusting of namespaces in app manifests. This can also be automated. Deleting such environments is done by simply deleting a folder in git.

Following features are, in my opinion, what also makes this tool so great and worth investigating:

As mentioned, in our project, Helm was used before ArgoCD. When we started using ArgoCD, in order not to change too much, we wanted to continue to use Helm charts. Instead of deploying charts manually using helm install or helm update commands we have used ArgoCD’s ability to generate static yaml-s using Helm just as a template engine before deploying them to cluster. ArgoCD even has its own hooks and dynamically turns Helm hooks into ArgoCD hooks which works great, so charts did not need any modification to be run by ArgoCD. Our idea is to also give a chance to Jsonnet as an alternative to a Helm to simplify things further.

There wasn’t much that we didn’t like, but few things are worth pointing out.

Recently a major security issue was discovered. Fortunately, it did not have any impact to us since we do run only trusted charts, but it’s always good to consider potential security issues when using applications such as ArgoCD, which has the ability to access sensitive information in your repository and cluster.

Sometimes, given the right conditions, ArgoCD might issue many API calls to Kubernetes API. In recent versions, this was optimised, but it’s still something to bear in mind.

There are several ways of managing secrets in ArgoCD. For our use-case we have chosen Hashicorp Vault with argocd-vault-plugin. It appears that in ArgoCD and Vault plugin versions that we are using, passwords are cached, so if they are changed in Vault, change will not be detected by ArgoCD unless pulling new password is forced by changing something else in the application manifest (e.g. name, label or any other value). Even a missing password is cached, so error persists if you add password to Vault later. This might be corrected in later versions, but that is still to be tried.

After using it every day for almost a year, I cannot imagine going back to the manual process of deploying apps to Kubernetes clusters. The amount of time and energy saved is precious for us! It rarely happens that a single tool solves so many problems at the same time, and does it through ubiquitous tools like Git which means that the learning curve is very gentle. It was adopted very quickly by all team members. Trust towards ArgoCD was developed very fast and now we do not even need to watch UI when applying changes. We just commit the desired state to Git repo and forget about it! If there is any problem – Argo will let us know via a Slack notification. I strongly recommend ArgoCD to any team dealing with problems similar to ours. For us, it did miracles. Maybe it can solve some of your problems too. Farm management software can help out any farm by collecting and displaying all the necessary information and metrics. 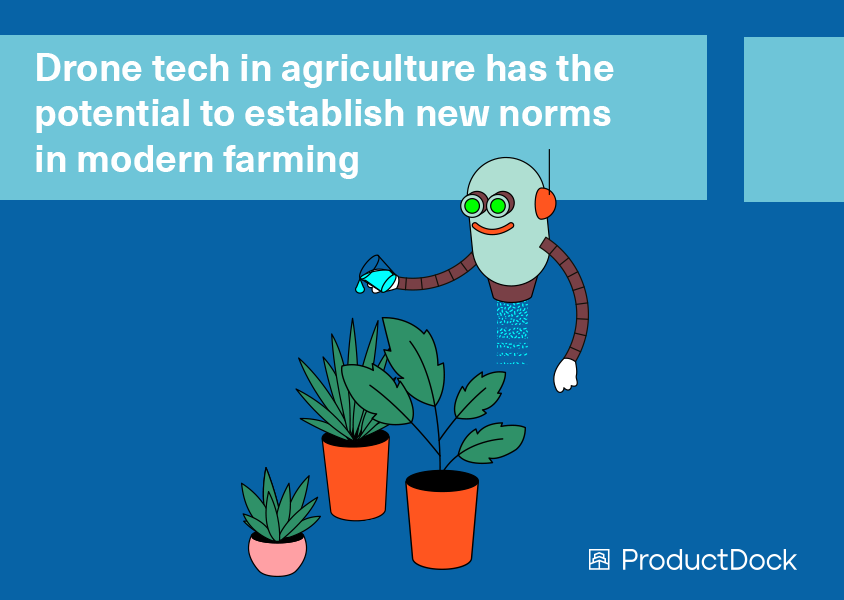 Initially built for military purposes, drones are currently making an impact in agriculture, improving the soil quality, yield and farming. 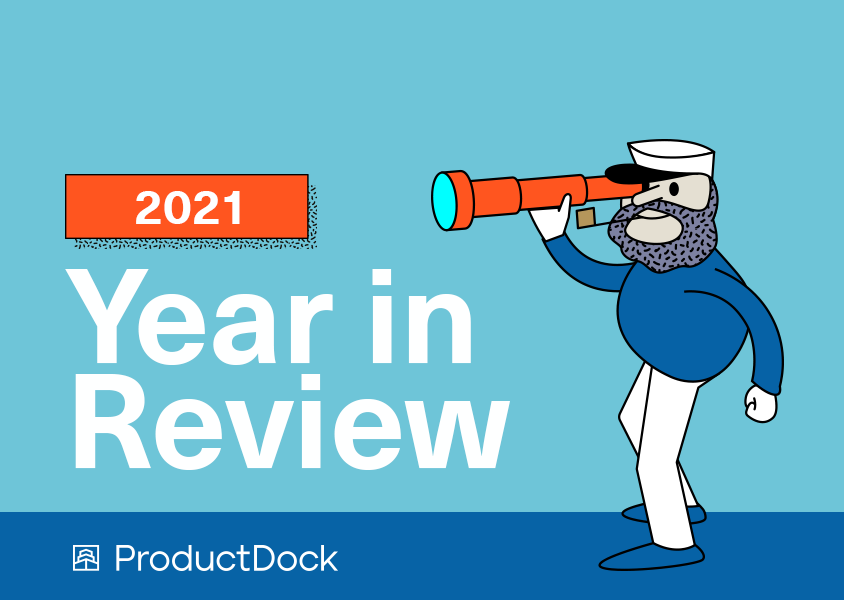 Year In Review 2021 – ProductDock went live, and… The best is yet to come!

If you had to choose a moment to start a new business, doing so in the middle of 2021 would definitely be the least favorable time. 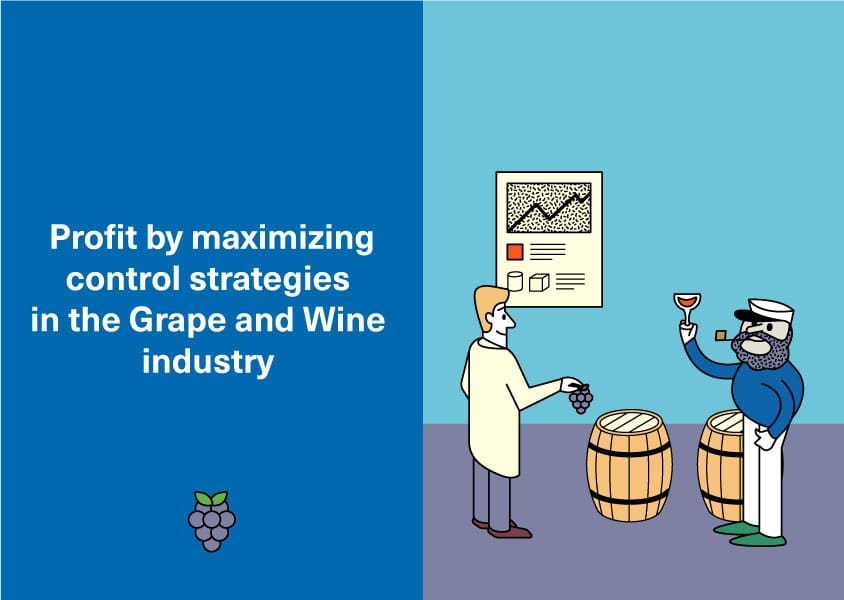 How can you profit by maximizing control strategies in the Grape and Wine industry?

Growing wine grapes is, without a doubt, a prestigious activity, but let’s not forget, it’s also a business. 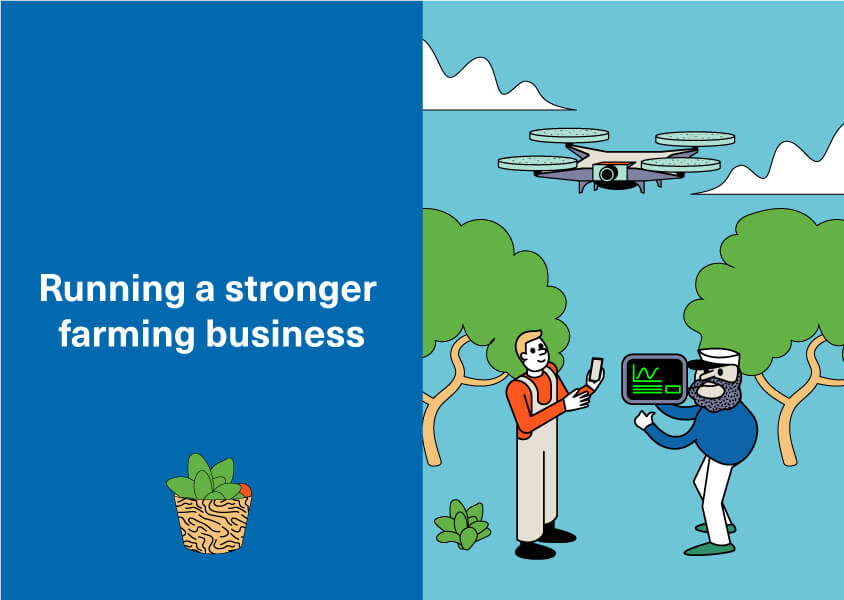 Are you committed to helping farmers use technology to run stronger businesses?

When we think about entrepreneurship, we usually think about running digital businesses to help out restaurants, shops, and a wide variety of other businesses. 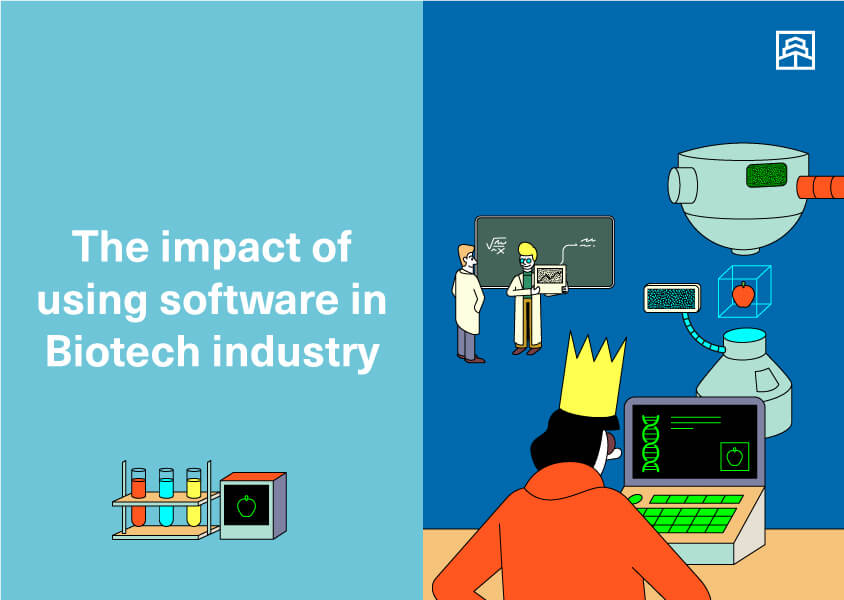 The Impact of Using Software in the Biotech Industry

The digital revolution has been on the move for a while and some industries are slower to adapt than others. 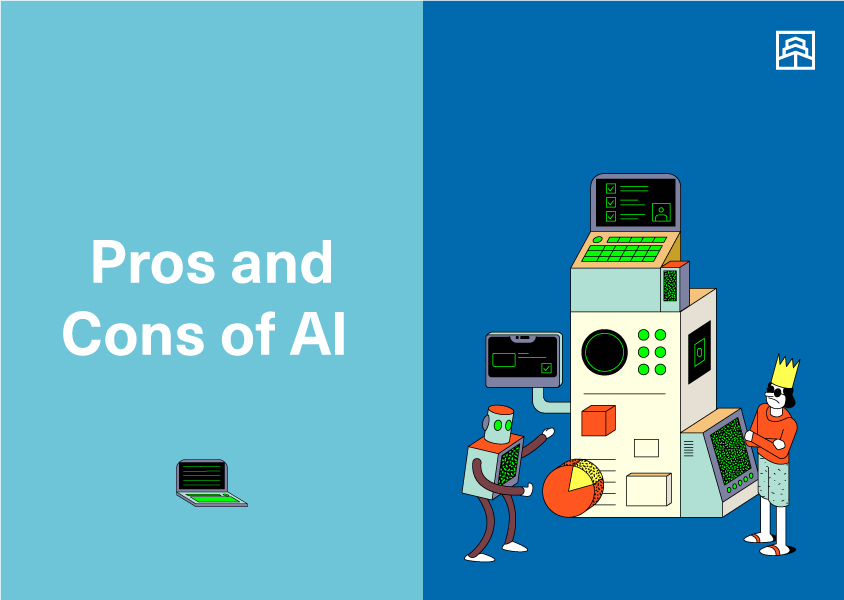 Pros and Cons of AI

Artificial Intelligence or AI is one of the leading emerging technologies today that most people talk about in the tech world. 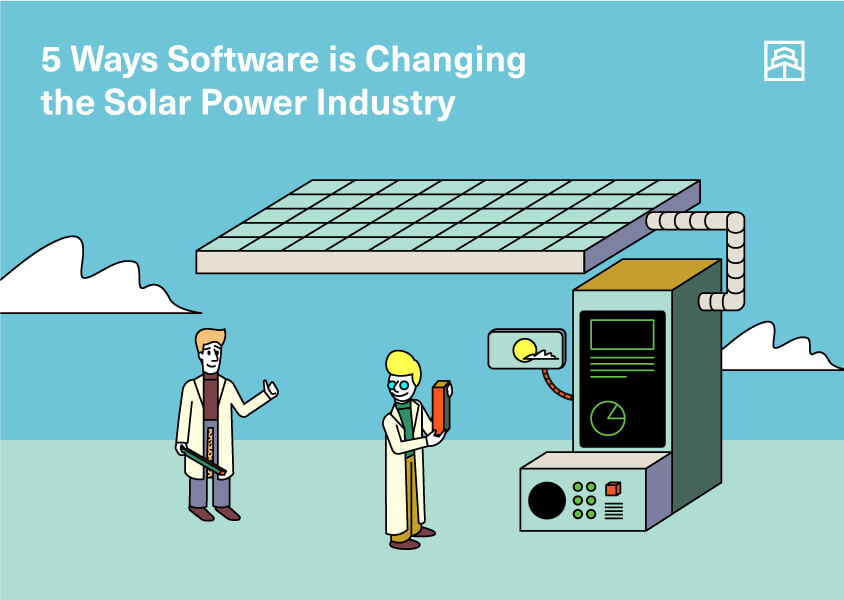 When a firm chooses to make good use of solar power software, the probability of turning a pretty good ROI is rather high. How Software Helps During COVID-19 in the Hospitality Sector

After the worldwide outbreak of COVID-19, the hospitality industry clearly got the biggest uppercut of them all. 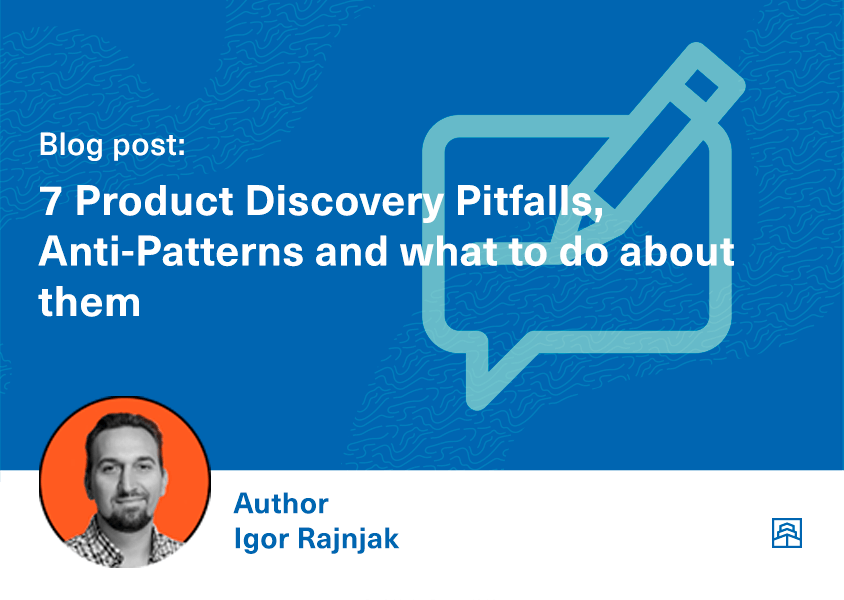 Product Discovery Pitfalls, Anti-Patterns and What to Do About Them

Product discovery: The good, the bad and the ugly
If you want to create great products and not realize only after they have been delivered that they have fallen short of your expectations, you need to do product discovery.